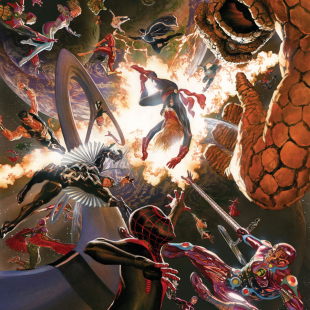 On the off-chance you're one of those random comic readers that live under gigantic, super-sized rocks, Marvel Comics is currently in the midst of Secret Wars. Easily one of the biggest events the publisher's produced in recent memory, it's already done the dirty deed of destroying Marvel's 616 and Ultimate universes and, by its end, will create a new universe where a combined cast from the two will live together. Tearing down two continuities and combining them together into a single living universe isn't an easy task. In fact, it would seem that it's more difficult than even Marvel had initially anticipated.

Hoping to make the job a bit more manageable, the publisher has announced that it will be extending the mini-series from eight issues to nine. "Secret Wars is even bigger than we thought it was," explained Marvel's Editor-in-Chief Axel Alonso. "To help Jonathan [Hickman] and Esad [Ribic] conclude this epic event as big and bombastically as it started, we are adding an extra issue. That means one more month of the suspense, action and game-changing storytelling that fans and retailers have been clamoring for since the final incursion started." Speaking about the extra issue further, company representative David Gabriel affirmed that it "will not affect any of the new launches" currently planned to release following Secret Wars' end. That said, he did promise that "there might be a surprise or two left over from Battleworld" that reader won't be expecting. Secret Wars issue nine will release this December.

While you can be sure that this announcement will likely leave some fans hemming and hawing, I'm going to go ahead and say that I think an extra issue can really only benefit the story as a whole. I've been reading Secret Wars since it started and, honestly, I've been wondering how Hickman and Ribic were going to wrap it all up in a mere eight issues. Maybe it's just me, but it felt like they still had a long way to go and not enough time to get there. If an extra issue gives them the space they need to finish things without rushing them, then more power to Marvel.