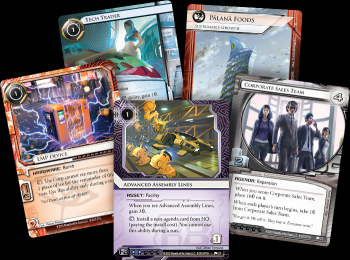 Later this year, Fantasy Flight Games will release the next cycle of expansions for their popular Living Card Game, Android: Netrunner. This time, the game travels to a cyberpunk India in a moment of political upheaval.

The Android universe takes place after the construction of a massive space elevator, the Beanstalk, allows colonization of the moon and deep space. The socio-economic make-up of the world shifts dramatically, corporations take on more power than governments, and people jack their brains directly into the Net, a self-perpetuating virtual environment, built on what was once the web but now independent of it.

For the curious, the Shut Up and Sit Down crew review Netrunner about 10 minutes into this video. Fair warning: Quinns' enthusiasm tends to leave wallets in ruins.

The Mumbad Cycle will be a series of six expansions, each a set 60 cards, that explore the new Indian megacity one district at a time. India's caste system is mostly a distant memory, though a shadow of it remains: the players find themselves in Mumbad as an election becomes a referendum over whether genetically-engineered clones deserve human rights.

The first pack in the cycle is set in Kala Ghoda, the city's art district, which houses its historical museum and university. The second brings us to the heart of Mumbad's financial sector, and introduces the cycle's first new Identity: Palana Foods, a deceptively gentle division of Jinteki.

Check out the gallery of upcoming cards below:

I really want to know what goes into that "Improved Protein Source." It's probably nothing evil.

Originally designed by Richard Garfield (Magic: The Gathering) in the 90s, Android: Netrunner is a sci-fi heist game wherein one player plays a hacker, or Runner, and their opponent is an (arguably) evil megacorporation.

The Corp has all the Agenda cards in their deck, and needs to spend time and money advancing them to the point where they can be scored. The Runner, meanwhile, uses a variety of tools to get the job done. The Corp can build walls, place guard dogs- but some prefer to simply leave destructive ambushes, or follow the Runner home and blow them right up.

It's a war of information. It's a card game where you can attack another player's hand, or deck - or discard pile. One of the factions is basically a Disney/FoxNews lovechild. Any fans of the game (other than myself) at the Escapist? I'd love to see decklists for Palana Foods in the comments - I've already got a few brewing as I write this.