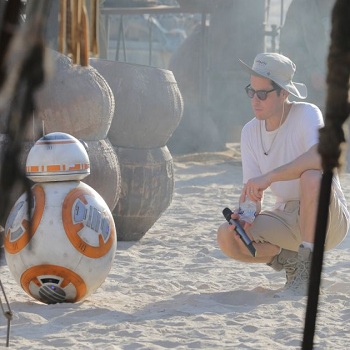 The latest issue of Empire magazine gives us a sneak peek at life on the set of The Force Awakens and a preview of their subscriber's cover.

We are still some four months out from the premiere of Star Wars Episode VII: The Force Awakens. You know this. I know this. Chewbacca knows this. J.J. Abrams definitely knows this, but because he is a bit of a sadist, he's content to tease the everloving sh*t out of us with trailers, set photos, and the occasional discussion about Nazis and Darth Vader until then.

As such, Empire released several new behind the scenes photos from Episode VII earlier today, as well as both the light side and dark side issues which hit stands this week *and* an exclusive preview of their subscriber's cover featuring none other than the latest Star Wars droid, BB-8. I can practically taste the space dirt.

Check out the photos in the gallery below, then start figuring how we can cryogenically freeze ourselves until the Episode VII premiere.

When discussing exactly how BB-8 came to be, concept designer Christian Alzmann said that, "J.J. wanted something rolling on a sphere, so I tried a lot of different designs developing that idea. He would give direction on the kinds of shapes to use, and that led to a personality for the droid. Of course, the original sketch had very pleasing, round shapes, so you kind of figured it wasn't going to be a very serious or angry character. Ultimately, BB-8 developed out of a back-and-forth process with J.J. where he gave feedback on each iteration of the design."