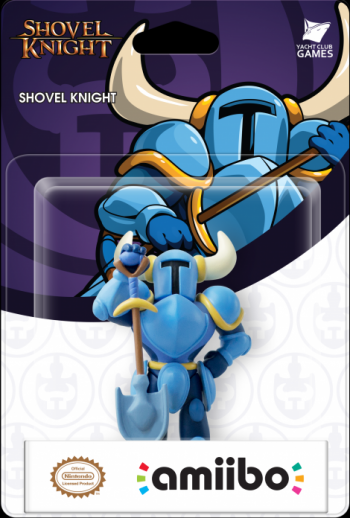 Looks like Shovel Knight's titular hero will be getting his own amiibo.

Nintendo has found runaway success with it's amiibo NFC figures, and it looks like even indie Shovel Knight developer Yacht Club Games wants in on the action - announcing a Shovel Knight amiibo for use with the Wii U and 3DS versions of the game. Just like other amiibos, the Shovel Knight amiibo will unlock some exclusive content in his game, and may even have some future cross-over with other titles (like perhaps... Super Smash Bros.?)

"Today, we have the great pleasure of announcing a new Shovel Knight amiibo! Yes, it's real! We've been working on it for over a year! It's been quite the burden to keep it under our chest and our excitement in check," wrote Yacht Club Games on its website.

As for what goodies the amiibo will unlock, there will be some amiibo exclusive challenge maps that take advantage of the new amiibo relics and abilities. It also has something to do with the Wii U exclusive co-op mode, but we are hoping that it won't be necessary to play the mode.

"We plan to continue support of the Shovel Knight amiibo in future Yacht Club Games and Nintendo products," added the developer. "Stay tuned to amiibo.com for compatibility details in new games."