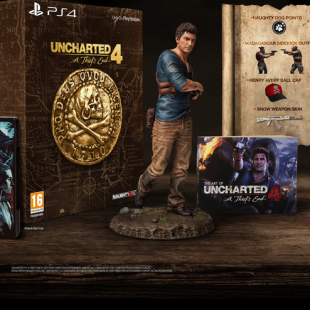 Uncharted 4 will be launching next March with two special editions for fans who want more than the standard package.

Back when the PS3 first launched, its library of games wasn't the best. Standing tall among its early lineup however, was a third-person shooter by the name of Uncharted: Drake's Fortune. Many PS3 owners bought it just to have something to play on the console and were pleasantly surprised by a genuinely great game that would serve as the foundation for one of the PlayStation brand's most beloved modern franchises. It shouldn't be hard to understand, in turn, why some are so eager for Uncharted 4: a Thief's End. Those same gamers will likely be excited to learn that the new game has finally received an official release date.

According to an announcement posted to the PlayStation Blog earlier today, Uncharted 4 will be available for purchase starting on March 18th, 2016. The standard retail edition, as you might expect, will come with the game. Fans interested in a bit more "booty for your castle" however, will also be able to pick up a pair of special editions that will each come with their own assortment of goodies based on the game. The Uncharted 4 Special Edition will include the game, a steelbook case with unique artwork, a 48-page art book, stickers and in-game points that players will be able to use to "unlock new multiplayer content and character upgrades." The Collector's Edition, meanwhile, will include everything from the Special Edition as well as a 12-inch statue of Nathan Drake, a trio of multiplayer outfits and weapon skins, special sigil caps, sidekick outfits, a unique taunt and a dynamic PS4 theme based on the game. Standard and deluxe digital versions are also being planned with bonuses for gamers who choose to pre-order.

What's currently unclear is how much all of these varying versions will cost. While we're assuming the standard versions of the game will be priced at the usual $59.99, no pricing information has been released for the Special and Collector's games. Even so, it's nice to know what's coming and, above all else, when. Let us know what you think of the Special and Collector's Editions of Uncharted 4 and which versions you'll be buying when the game hits stores next March.