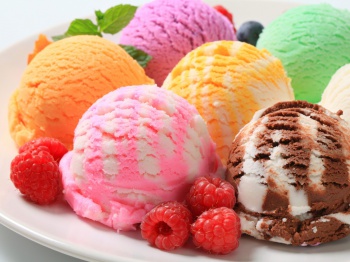 British scientists have isolated an ingredient that can keep ice cream from melting in the summer heat.

As the U.N. convenes a closed-door meeting on climate change this week, British scientists are one step ahead of the game on averting the worst kind of heat-related catastrophe: next summer, your ice cream cone won't melt.

Food researchers, from the Universities of Dundee and Edinburgh, have isolated a naturally occurring protein, BsIA, that binds the air, fat and water in your triple scoop. In the end, this severely limits how quickly your frozen treat is going to melt.

The protein also keeps the ice cream frozen for longer, preventing gritty ice crystals from forming when you've kept the stuff in your freezer too long.

Cait MacPhee, a professor of ice cream science at Edinburgh and leader of the study, told the Telegraph, "we're excited by the potential this new ingredient has for improving ice cream, both for consumers and for manufacturers."

Personally, I'm not sure what the big deal is here. People have told me of this supposed 'melting,' but I've eaten three bowls of ice cream since I started writing this article and haven't noticed a thing.

Now, if only someone could invent ice cream that doesn't fall out of the cone just after you've paid for it...