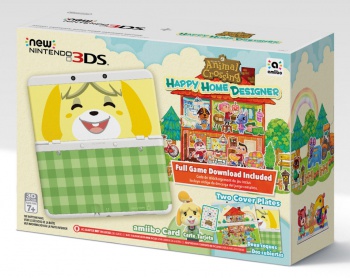 The non-XL variant of the New Nintendo 3DS (with swappable face-plates) is finally getting a US release.

Back when Nintendo first unveiled its New Nintendo 3DS, it showed us two distinct variants: the standard version, and a larger XL version. Perplexingly, when the device finally came stateside, only the larger XL model was released. This bothered a lot of fans because only the smaller, standard model had the cool swappable faceplates feature.

The bundle will set you back $219.99, and will be released in America and Canada on September 25. The bad news is that no additional faceplates are being made available, so if you'd like to take advantage of the feature, you'll have to import your own plates from regions that sell them.

There's no word on whether or not the standard New 3DS will ever be sold in America outside of the limited edition Animal Crossing bundle, so if you want to get your hands on it, now is the time.