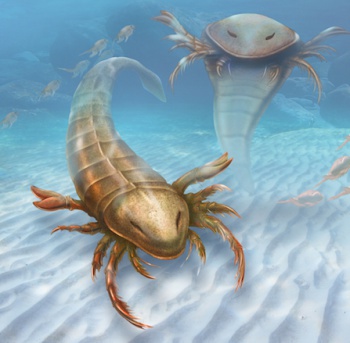 Researchers have unearthed the oldest sea scorpion yet known to man. Six feet long and resembling an ancient warship, it terrorized what is now Iowa half a billion years ago.

Ancient Iowa was apparently home to one of the earliest large predators yet known to science, researchers announced this week. They have unearthed remarkably well-preserved fossils of an animal they are naming Pentecopterus decorahensis.

The name comes from a resemblance the animal bears to an ancient Greek warship known as the penteconter. "Pentecopterus was an incredibly bizarre animal, with a long head that looked somewhat like the prow of a ship, a narrow body and massively enlarged limbs that it used to capture prey," says Yale paleontologist James Lamsdell. "It would have been the largest predator in its environment and would have grabbed prey with its large, spiny legs and then pulled it towards its mouth."

I'm just going to take a stand and say everything was terrifying back then.

You can see for yourself how well these fossils have held together over 460 million years in the gallery below (also included is a mock-up of what the animal may look like in its natural habitat, as well as modern horseshoe crabs for reference, courtesy of Wikipedia):

The enormous sea scorpion - measuring nearly six feet - is the earliest discovered member of the extinct eurypterid group (not The Eurythmics). These monstrous beasts may be long gone, but half a billion years later you see their modern relatives everywhere - they include terrestrial spiders (which still swim!) and horseshoe crabs.