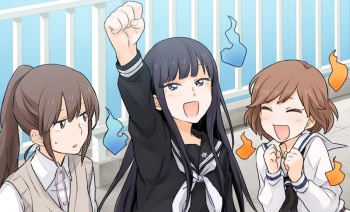 Adult visual novel Kindred Spirits on the Roof is making its way to Steam - and nothing is being left out.

Update: A Twitter user identifying themselves as Kindred Spirits' translator has stated on Twitter that "the sexy scenes make up less than 5% of the script." They also wrote: "Yes, I would say sex is an important part of the game, but the focus is more on the relationships of 7 different couples (living and dead!) There isn't a ton of sexual content and I wouldn't call it "gratuitous," but it is sort of at the core of the story."

Original Story:Steam may not be your go-to spot for sexy titles - mainly because the platform has frequently censored titles that depict sex(example). But that may soon be changing. Japanator has shared the story of Kindred Spirits on the Roof, the adult visual novel from Liar Soft who annouced on MangaGamer that the title will release on Steam with zero censorship.

"It's great to see our years of effort finally paying off as visual novels containing adult content gain more mainstream acceptance and recognition as a valuable medium for artistic expression," head translator Kouryuu wrote. "This is monumental news for the industry as a whole. Everything will be open and up-front with this release; no off-site patch or workarounds. Kindred Spirits will be sold on Steam completely uncensored."

According to the Kindred Spirits MangaGamer Page, the title features a schoolgirl, Toomi Yuna, who encounters two ghosts that met on the roof of the Kokonotsuboshi Girls' Academy of Commerce, fell in love, and desperately want to experience their "first time" with one another - only they don't know how.

"The two who are bound to the site of the school enlist Yuna to help them create more "yuri" couples at the school so that they can glean some sexual insight from observing them, and to assist the girls struggling with their hidden feelings."

Kouryuu wrote "Seeing frank depictions of same-sex relationships welcomed on such a major gaming platform is a true testament to the open-mindedness of our society and the growing desire for mature entertainment that people of all walks of life can enjoy."