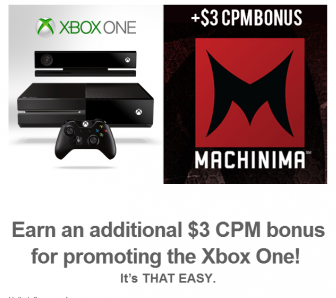 The FTC and YouTube network Machinima have reached a proposed settlement amidst a paid Xbox endorsement controversy.

YouTube gaming network Machinima has reached a proposed settlement with the Federal Trade Commission following allegations that the network engaged in "deceptive advertising" by paying "influencers" to post YouTube videos endorsing Microsoft's Xbox One system, as well as several games. It was also alleged that video makers did not appropriately disclose that they were being paid for their opinions, as they were prohibited from discussing the particulars of their deals publicly. In the full complaint,the FTC stated that Machinima's agreement with Microsoft "promised that the influencer videos would 'not portray [Microsoft], the Xbox One, or the Launch Titles in a negative manner,' and that Microsoft could request that Respondent take down any video that violated this promise."

"Under the proposed settlement, Machinima is prohibited from similar deceptive conduct in the future, and the company is required to ensure its influencers clearly disclose when they have been compensated in exchange for their endorsements," a press release reads.

"When people see a product touted online, they have a right to know whether they're looking at an authentic opinion or a paid marketing pitch," said Jessica Rich, Director of the Bureau of Consumer Protection. "That's true whether the endorsement appears in a video or any other media."

According to the press release, the FTC has also sent a letter to Microsoft and Starcom closing its investigation into the two companies in this case. "According to the letter, while Microsoft and Starcom both were responsible for the influencers' failure to disclose their material connection to the companies, Commission staff considered the fact that these appeared to be isolated incidents that occurred in spite of, and not in the absence of, policies and procedures designed to prevent such lapses," the release reads. "The companies also quickly required Machinima to remedy the situation after they learned that Machinima was paying influencers without making the necessary disclosures."

The FTC guidelines require a full disclosure "when there exists a connection between the endorser and the seller of the advertised product that might materially affect the weight or credibility of the endorsement."

At the time that these practices were uncovered, Machinima and Microsoft defended the arrangement in a joint statement, writing "This partnership between Machinima and Microsoft was a typical marketing partnership to promote Xbox One in December. The Xbox team does not review any specific content or provide feedback on content. Any confidentiality provisions, terms or other guidelines are standard documents provided by Machinima. For clarity, confidentiality relates to the agreements themselves, not the existence of the promotion."

Machinima later released an additional statement, stating that it typically requires channel partners to include certain language in their video content relating to its promotions. "That didn't happen here and we're evaluating why," the statement said. "All participants are being asked today to include our standard language going-forward. We apologize for the error and any confusion."