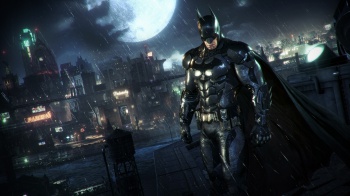 Batman: Arkham Knight's unplayable PC port may be (finally) about to receive it's long-awaited fix.

Update: Rocksteady has now officially released the promised PC patch, that aims to fix the majority of issues PC users ran into. Unfortunately, the game still has not been put back up on the Steam Store, and Rocksteady offered no ETA of when this would happen.

Original Story: So remember that whole Batman: Arkham Knight PC port fiasco that eventually led to the game being pulled from sale until a patch was applied? Well, Rocksteady sure as heck hopes you forgot, as the last we heard back in July was that the patch wasn't coming till fall. The "good" news is that now that September has begun, it looks like the PC fix is right around the corner, as PC gamers were briefly able to test out a "beta" version of the promised patch that seemed to iron out most of the issues.

Essentially, PC players that had already purchased the game before it was pulled, who had opted into the game's "beta" updates, were delivered a patch earlier today. The patch introduced a slew of new graphics options, as well as dozens of bug fixes. While it was only available for a short time, the users who were able to test it out reported that many of the game's problems had been fixed.

The fact that it was released only in the "beta" updates and pulled quite shortly afterwards suggests that it is not 100% complete yet, but it is certainly a good sign that Rocksteady is finally getting off their butts and fixing something that honestly, should have been done months ago.

Let's hope for their sake there is still enough interest among PC gamers when the patch is actually finally released.