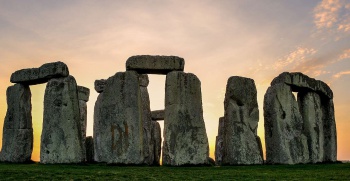 First of all, this is definitely not a marketing stunt for Doctor Who - which returns to BBC on September 19th! Archaeologists from the University of Branford really have discovered a super-site beneath the British countryside, about two miles from Stonehenge itself, and several times larger than the famous monument.

Underneath the Durrington Walls - already one of the largest known hedge monuments, built in the same time period as its more famous cousin - remote sensing technology has revealed dozens upon dozens more standing stones.

"Our high-resolution ground penetrating radar data has revealed an amazing row of up to 90 standing stones, a number of which have survived after being pushed over, and a massive bank placed over the stones," says Professor Wolfgang Neubauer, who is director of the Ludwig Boltzmann Institute for Archaeological Prospection and Virtual Archaeology.

Adds Paul Garwood, "the extraordinary scale, detail and novelty of the evidence produced by the Stonehenge Hidden Landscapes Project, which the new discoveries at Durrington Walls exemplify, is changing fundamentally our understanding of Stonehenge and the world around it." Garwood is an archaeologist and lead historian on the project at the University of Birmingham.

"Everything written previously about the Stonehenge landscape and the ancient monuments within it will need to be rewritten." I really hope that doesn't include the finale of my favourite season of Doctor Who (yes, I fully expect to be bombarded with comments about how wrong I am).

Stonehenge, of course, remains shrouded in mystery - though many convincing theories exist as to its purpose and its construction, a lack of primary sources from the time period means any knowledge we can glean about the monument (if the structure is a monument, at all), is ephemeral. And you know what? Curious though I may be, I think I like it like that.