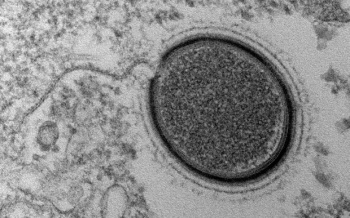 A 30,000 year-old "giant" virus discovered in Siberia might awaken due to climate change, prompting scientists to experiment on it now.

Outside of the obvious concerns around climate change, there is an especially worrying side effect: The return of prehistoric viruses. As Arctic environments warm up, ancient viruses that lay dormant for thousands of years might thaw and reinfect humans once again. Now a team of French scientists are closely studying viruses uncovered in Siberia to ensure they won't wipe out humanity in a few decades. The trouble is, you can't just study frozen samples to see what will happen - which is why the team will attempt to revive the virus to see what it's capable of.

To be clear, the team aren't mad scientists resurrecting an ancient plague to set it loose on the general population. These researchers from France's National Centre for Scientific Research will run experiments in safe laboratory conditions after verifying the bug can't infect humans or animals. Researchers will place the virus - called Mollivirus sibericum - in a petri dish with a single-cell amoeba which should act as a host. "A few viral particles that are still infectious may be enough, in the presence of a vulnerable host, to revive potentially pathogenic viruses," lead researcher Jean-Michel Claverie explained.

According to Claverie, these studies are important because frozen regions like Siberia will soon be accessible to industrial development. "If we are not careful, and we industrialize these areas without putting safeguards in place, we run the risk of one day waking up viruses such as small pox that we thought were eradicated."

There is a precedent for such research. In 2004, a team of US scientists resurrected the Spanish flu to better understand how it could kill tens of millions of people. Yet by comparison, M. sibericum is far more complex, being a "giant" virus with over 500 genes while the Spanish flu only had eight. And M. sibericum isn't even the biggest virus out there - the Pandoravirus uncovered in 2003 has 2500 genes.

So to conclude, I'm glad Claverie's team is doing this research. But I can't help but feel tempted to hide in a bunker until sometime after the results are published.