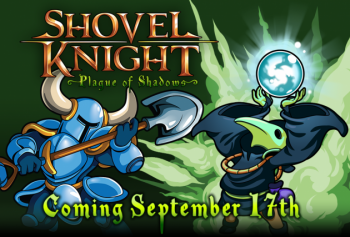 Shovel Knight: Plague of Shadows will release on all platforms and in all regions simultaneously.

Shovel Knight, Yacht Club Games' indie darling, has been getting a lot of positive attention lately, especially around the impending release of its free DLC expansion: Plague of Shadows. The good news is that today YCB has announced the official release date of the expansion, and confirmed that it would indeed be coming to every platform and region at the same time!

Shovel Knight: Plague of Shadows will release on PC, PS Vita, PS3, PS4, Xbox One, Wii U, 3DS, Linux and OSX on September 17. The update will be completely free for all current Shovel Knight owners, and adds a complete re-mix of the game's story mode, staring new playable character Plague Knight, as well as additional challenge maps.

Be sure to check out the official website for more information on the expansion, especialy this tutorial on how exactly Plague Knight will play differently from his shovel-wielding counterpart.