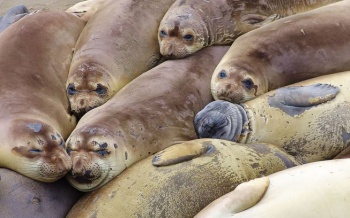 Researchers may have figured out one way toxic mercury makes its way from the ocean onto our coast lines. Apparently, sea lions and seals are bringing it ashore with them.

I've always insisted: seals and sea lions are out to get us. You might call me paranoid; you might say we deserve it; but researchers today have released a study that backs up my claims. These supposedly adorable marine mammals are slowly poisoning us.

Well, we're actually poisoning ourselves. Human-caused pollution has been dumping an especially nefarious variant of mercury, methyl mercury, into our oceans for more than a century. We should feel badly about this - and we do, actually, because this mercury keeps making its way back onto land and into our bodies, eventually poisoning us. Mercury's been known to directly affect our brains, causing insanity, dementia, birth defects, and a host of other maladies.

Where do sea lions and seals factor into this? Well, they are predators, at the top of their respective food chains. Mercury we spill in the ocean gets soaked up by various plants and plankton, eaten by small fish, which are eaten by bigger fish, and so on - eventually, that elephant seal is going to chomp down on a meal that's more thermometer than tuna. The higher up the food chain you go, the more concentrated the mercury gets - up to ten million times more concentrated than in the surrounding seawater.

So these marine mammals come to shore, and end up leaving behind their molted fur, filled with the shiny toxic element. It seeps back into the soil (much of which leaks back into the ocean, where the cycle begins again), and we come along and drink it up. The study's numbers show how toxicity levels in seawater around Año Nuevo - a California beach - are twice as high as they should be during mating season, and seventeen times as high during molting season.

Californians already have enough to worry about, without contaminated critters dumping poison on their doorsteps.

Mercury is an especially insidious pollutant - not only because of how devastating it can be to ourselves and the environment, but because of its very nature as an element: it isn't going to break down into anything, it's just going to keep cycling through the food chain until there's nothing left to eat it or someone takes a proactive approach and takes it out of the water.

So what is the solution, here? Well, there really isn't a good one, yet. Small projects are being undertaken to slowly leach toxic substances from the oceans, but it's an uphill battle. Hopefully, knowing more about how mercury moves through the ocean - such as piggy-backing on sea mammals - will give us some insight.

In the meantime, I would advise eating slightly less sea lion steak than usual.