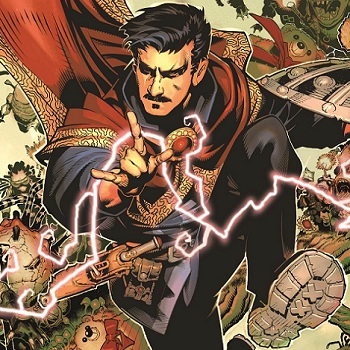 Although it will still be a good year before the movie hits theaters, Marvel released a handful of images from their upcoming Doctor Strange comic book series earlier today.

Ever since it was announced late last year that Benedict Cumberbatch would be playing Marvel's Doctor Strange in an adaptation directed by Scott Derrickson, fans have been clamoring for some new content to chew on in the interim. And today, they'll finally get some.

A press release sent out just this afternoon gave us an exclusive first look at Marvel's Doctor Strange #1, the first ongoing series featuring the neurosurgeon turned Avenger in nearly twenty years. From creators Jason Aaron (Star Wars, Thor) and Chris Bachalo (Uncanny X-Men, Avengers), this upcoming series will explore a whole new side of the man, the magician, the mustachioed master who first appeared in Strange Tales issue 110 back in 1963.

Check out Marvel's summary and accompanying images below.

Prepare for a side of the Marvel Universe you've never seen before as the magical, mystical and all things weird lie at every turn! And if you don't know where to turn - call the Doctor.

From inside his Sanctum Sanctorum - the Master of the Mystic Arts defends the Marvel Universe from any and all supernatural threats.

But a dark new power is rising. One that will have repercussions for all magic users. The threat is growing, and Strange knows he won't be powerful enough to stop it. If he is to have any kind of hope, it'll take a new kind of Sorcerer Supreme. Because all magic comes with a price, and it's high time Stephen Strange balanced the scales.

If you're unfamiliar with the story of Dr. Strange, it's one of the more compelling ones in the Marvel Universe. The creation of Stan Lee and Steve Ditko, Dr. Stephen Vincent Strange is a gifted (and therefore) arrogant surgeon who loses everything when an accident permanently damages his hands. He seeks out a cure for his ails in the form of an ancient Himalayan mystic, who instead drafts him to become The Sorcerer Supreme. The 2016 film, which will not tie into the upcoming series, is expected to be one of the cornerstones of Marvel's "Phase 3" slate of feature films.

Dr. Strange #1 hits stands on October 7th, and will also contain a bonus five-page story by Jason Aaron and Kevin Nowlan that sets up several major storylines for