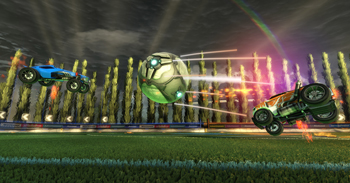 Plan to be dominated.

Rocket League has been updated this week, resetting the game's pre-season leaderboards and marking the beginning of official ranked play.

An explanation for how the ranking system will operate has been published in the patch notes. Players will be ranked in divisions based on their ability to earn Rank Points, which are gained and lost depending on their skill, that of their teammates, and of their opponents. There are eleven ranked divisions in total across five tiers (Unranked, Bronze, Silver, Gold, and Platinum), with the top tier consisting of the 100 best players.

Reward items will be given to players who end the season in the Silver, Gold, or Platinum divisions. The first season is planned to run for "several months," with the developer promising a more specific announcement regarding its end several weeks in advance.

Other changes brought by the patch include an option for PC players to filter PS4 players out of matchmaking, more than thirty flag accessories, and tweaks to the Utopia Coliseum arena introduced last month.

While I often feel quite skilled playing Rocket League against the funseekers on public servers (who seem generally content to chase the ball without a coherent strategy), the rash of videos and GIFs of players pulling off ridiculous goals and saves makes the prospect of participating in ranked play terrifying to me. But if seasons ended with a livestreaming tournament of top ranked players taking to the field, that's the kind of entertainment I'd tune in for.