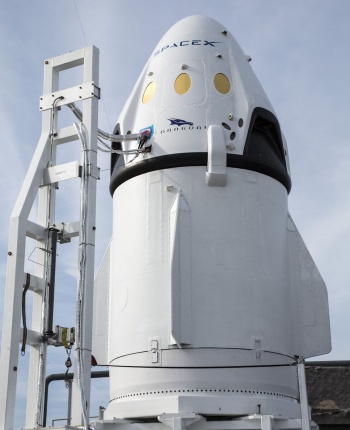 SpaceX has lifted the veil on its Crew Dragon spacecraft, designed to take astronauts to the International Space Station - and beyond.

It is not an understatement to say that SpaceX has had a rough time of late. In spite of its recent failures, Elon Musk and his dream team remain ever-hopeful. To wit, they'd like to take you on a little tour of their latest endeavor, the Crew Dragon.

This is the capsule that will someday soon be taking astronauts to the International Space Station - and perhaps, even further.

Possibly thanks to its distant cousin, the Tesla automotive, the inside of the capsule is reminiscent of a luxury car. At least, a swanky car with an emergency eject hatch. Also of note are the many windows - who doesn't like a nice view?

Also known as the Dragon 2, this spacecraft is the latest iteration of SpaceX's flagship line. The first Dragon, launched in 2010, became the first commercially built and operated spacecraft to be recovered from orbit.

Of course, they are not the only company striving to get humanity off the ground. Recently, a Canadian company was granted a patent on a space elevator, and more start-ups on the way.

Who knows? Someone reading this post could be in orbit five years from now (if we aren't all destroyed by robots, which Musk is also working against). What do you guys think - am I a bit too hopeful here?