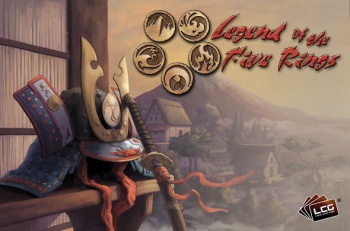 The venerable setting for card game and RPG alike, Legend of the Five Rings has been acquired by Fantasy Flight Games. It is to be redesigned and relaunched in time for Gen Con Indy 2017.

"Understand the Will of Heaven and you make all things possible. Ignore it, and you will accomplish nothing." So says the Tao of Shinsei, and veteran players of the Legend of the Five Rings should take those words to heart. The classic setting, which encompasses both a CCG and an RPG, has been acquired by Fantasy Flight Games, and will be redesigned and relaunched in 2017.

It's not dead; it's just taking a little break.

This may strike long-time players as sad news, but if there is one company that knows how to take a classic card game and modernize it without alienating its truest fans, that company is FFG. The current iteration of the L5R CCG will come to a close with the Evil Portents expansion later this year. Afterwards, the game will go on hiatus until FFG reveals their take on it. As expected, it will become a Living Card Game, eschewing random boosters for regular, non-random expansions.

L5R has quite a history, and developed a passionate fan base. Created in 1995 by Alderac Entertainment Group, the setting is largely inspired by feudal Japan, infused with myth, folklore, and other East Asian cultures. Players build two decks each and face off against one another, calling unique warriors, scholars, and creatures to their side in a cultural battle.

One of L5R's strongest and most unique aspects is its rich narrative, inspired by players' own actions. Real-world tournaments could decide the fate of characters or entire clans within the game. People are killed, or transformed, or evolve over time and new cards are printed to represent these changes. I have no doubt that Fantasy Flight will stay true to this facet of the setting.

For my money, though, Legend of the Five Rings appealed to me for its Civilization-like victory system - other than simply destroying their opponent, a player could work towards increasing their honor past a certain number, or acquiring all five of the legendary rings of power in an Enlightenment Victory.

Alderac Entertainment Group, for their part, will continue to publish their revamped Doomtown: Reloaded, a Western-themed game which takes a great deal of inspiration from L5R, especially with regards to its dynamic and evolving storylines. Maybe other maligned card games are due for their own second coming?

Any fans of the game at The Escapist? Anyone especially upset about this - or do you think this is what the game needed if it was going to survive at all in the market? Alternatively - is there a game that you are just hoping to see be cool again?