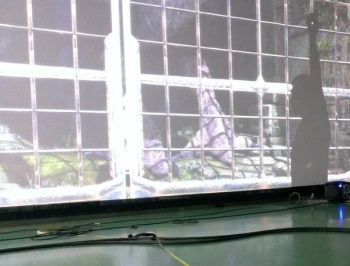 Team ICO has heavily hinted that The Last Guardian will be at this year's Tokyo Game Show.

The list of games that will be on display for this year's Tokyo Game Show did not include Team ICO's ambitious new adventure The Last Guardian, but a recent Tweet from the developer hinted that it would be making a surprise appearance at the show.

genDESIGN - the folks who are the creative team behind the project, recently Tweeted "We are thinking about how to take Trico to the Makuhari (in a new and different way)." For your information, the Makuhari refers to the Makuhari Messe - the convention hall where Tokyo Game Show is held every year. This seems to be pretty conclusive proof that the game will be in the show, and the accompanying image (which you'll see above) showed a large projector screen of the game, with a shadow of a man holding what appears to be a PS4 controller.

The good news for you guys is that The Escapist will be on-site for this year's Tokyo Game Show, so if The Last Guardian is there, then we will be sure to check it out for you.