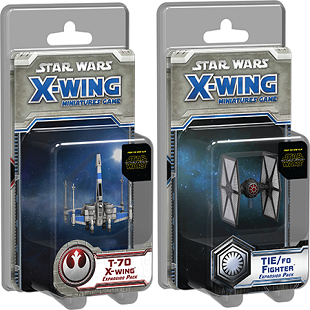 The past few weeks have been an exciting time for fans of Fantasy Flight's X-Wing miniatures game. Back in August, leaked photos revealed that the company had plans to release a new version of its Core Set complete with revamped X-Wings and TIE Fighters based on the ships featured in Star Wars: The Force Awakens. This leak was shortly after confirmed by Fantasy Flight itself in announcements and previews detailing how the new fighters would differ from their older counterparts. As nifty as all of this was however, the news was somewhat marred by the fact that the Force Awakens fighters were only available in the new Core Set. Priced at 40 dollars, it was potentially too expensive for players looking to invest a bit less.

Lucky for those gamers, Fantasy Flight, in an announcement this past Friday, revealed plans to release a pair of solo expansion packs aimed at providing a smaller scale option for fans looking to bring home the Force Awakens fighters. The T-70 X-Wing and Tie Fighter/fo solo packs will be sold as a part of the game's Wave 8 unit expansion which, as previously reported, will also add spacecraft drawn from Star Wars: Rebels and other places in the franchise. The new X-Wing pack will come with five upgrade and four ship cards while the TIE Fighter/fo will be packaged with two upgrades and six ship cards. The new cards will also be use-able with the Empire-era X-Wings and TIE Fighters, meaning they'll have even more value for veteran players with established squadrons. Both expansions will cost $14.95.


Speaking personally, this news is really welcome for me. I really enjoy X-Wing and I want these new fighters. The thing is, even if $40 is actually a pretty good deal for three fighters and the goodies that come with the Core Set, it's still a considerable chunk of change to dish out all at once. 15 dollars, though? It might not be as economical in the long run, but it's easier for me to justify in the moment. Check out the new solo packs yourself and let us know what you think. Will you be buying these or would you rather pick up the bigger Core Set?