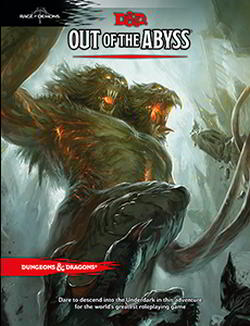 Wizards of the Coast drops a new module on Dungeons & Dragons players today, with Out of the Abyss being the first part of the new Rage of Demons story line.

Time to dust off the 20-sider again. It appears all is not well in the Underdark - is it ever? - as an evil dark elf wizard has opened portals into the Abyss and released a bunch of foul creatures. That's the story line for the new Out of the Abyss module for D&D released today by Wizards of the Coast.

The module is part of the new Rage of Demons overarching story event planned by WotC, where the Forgotten Realms is torn apart by Demon Lords, forcing players underground to stop the madness. The module is available for $49.95, and uses the current rules of the Player's Handbook, Monster Manual and Dungeon Master's Guide, and is for characters level 1-15.

In conjunction with the release, R.A. Salvatore has released a new Drizzt book called Archmage, the first of the new Homecoming series. The story is tied closely to the events of Out of the Abyss. From the synopsis:

The dark elves of Menzoberranzan, including the powerful Archmage Gromph, aren't done with Drizzt yet. And consumed by their own power struggles, feeling backed into a corner, the drow may just be desperate enough to call on demonic forces from the deepest reaches of the Abyss, and unleash a disaster even the Underdark could never have prepared for.

Maybe its time to get back into D&D. For those who are already playing the new rule set, what do you think?

Related to:
john keefer, dungeons and dragons, out of the abyss, ra salvatore, roleplaying, tabletop, wizards of the coast
0
Tweet