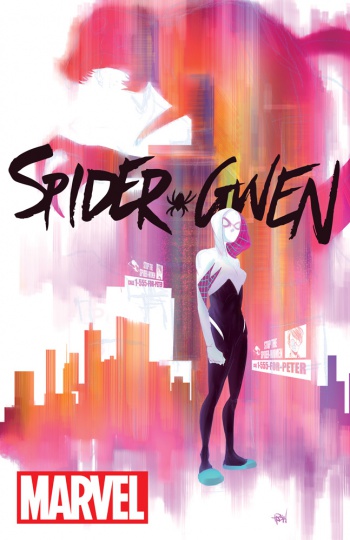 Marvel Comics' Spider-Gwen returns in October with a new first issue and even more variant covers.

It's been firmly established by this point that fans can't get enough of Spider-Gwen. After being introduced as a minor character in 2014's Spider-Verse event, she exploded in popularity, got her own spin-off book, and was quickly embraced by the cosplay community. Not even the universal upheaval of Secret Wars can keep her down: Once the dust settles in October, Spider-Gwen will return with a new first issue and full suite of variant covers.

In case you've completely missed Spider-Gwen's origin, here's a quick recap - she hails from a parallel universe where Gwen Stacey was bitten by a radioactive spider instead of Peter Parker. The new first issue returns Gwen to her home Earth, where she'll have a host of threats to deal with - like Matt Murdock, Kingpin of Crime. Or Frank Castle, Captain of the NYPD. On top of that, Gwen has to find the scientist who recreated Parker's Lizard formula, and runs into Harry and Normal Osborn along the way. But I'm sure that will turn out just fine.

Just like before, Spider-Gwen is rolling out a ton of variant covers to celebrate the new first issue. Outside of the obligatory-but-always-adorable Skottie Young cover, there's a Jack Kirby-styled Monster variant, Hip Hop-inspired art, and the cosplay cover revealed last month. Batman: The Animated Series fans will even notice a Bruce Timm Spider-Gwen cover.

Why do we even do standard covers for these books anymore? Artists clearly want to run wild with it. You can see for yourself when Spider-Gwen's new first issue arrives on Oct. 14, 2015.