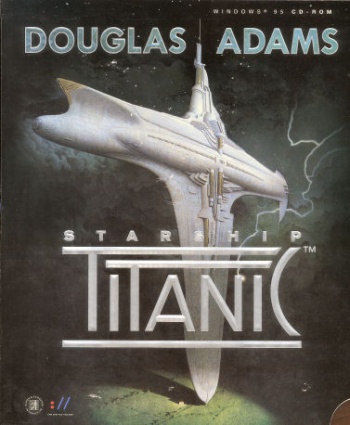 Starship Titanic, the long-lost adventure game created by Douglas Adams, has been re-released on GOG.com.

Douglas Adams was best known for his iconic The Hitchhiker's Guide to the Galaxy series, but he didn't work solely on books and radio serials. Back in 1998, he took a throwaway paragraph from Life, the Universe and Everything about an ill-fated space voyage, and expanded it into a video game called Starship Titanic. Sadly, compatibility issues - not to mention Adams' untimely passing - meant Starship Titanic faded away before it could appear on modern systems. Until today, that is. GOG.com has just re-released Starship Titanic, making the game compatible with Windows XP, 7, 8, and 10.

Starship Titanic takes place on a spacecraft of the same name, a majestic alien vessel resembling "the Ritz, the Chrysler building, Tutankhamen's tomb and Venice". But on the maiden voyage, a hyperspace accident causes it to crash-land into your house - and shortly after you board, it launches back into space. Now you must navigate the massive craft and communicate with its robotic crew, upgrading your way to first class while uncovering a way back to Earth.

Outside of Douglas Adams' credentials, Starship Titanic was known for its "SpookiTalk" system. Once a cutting-edge language parser, SpookiTalk let players have natural conversations with NPCs, incorporating 10,000 pre-recorded phrases in response to text prompts. (In fact, if you played them all back-to-back, you'd be listening for 14 hours.) Starship Titanic also had a notable voice cast: Monty Python's John Cleese played a sentient bomb, while Terry Jones was the game's talking parrot. Adams himself also voiced multiple characters, including Leovinus, Starship Titanic's creator.

Sadly, I never could find a copy Starship Titanic to play, but I did read the novel adaptation written by Terry Jones. If the original game even closely resembles its humor and style, I suspect it's well worth trying out. You can buy it today from GOG.com for $5.99.