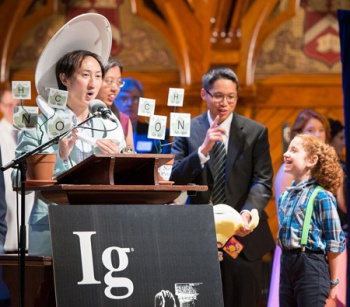 The 2015 Ig Nobel prizes have been handed out, awarding the strangest and most apparently useless advances in science.

Nature Magazine calls it, "...arguable the highlight of the scientific calendar." The scientists and inventors who win the award achieve tremendous fame, often at the expense of their own comfort, sanity... and dignity.

This is the Ig Nobel Prize, now in its 25th year. Handed out annually by The Annals of Improbable Research, there are ten categories for which an individual or team can qualify. There is, really, just one criteria - your research has to be almost entirely useless.

To wit: did you know that almost all known mammalian species empty their bladders in about the same amount of time? Well, the winners of this year's prize in physics can tell you it's about 21 seconds. Have you heard that the word "huh?" exists in every human tongue? Have a literature prize!

Have you been missing romance in your life? Why not read through the studies on the biomedical benefits - and consequences - of intense kissing. Their words, not mine.

Last - but not least, not by a long shot - is Michael L. Smith. Mr. Smith carefully arranged honey bees to sting him on 25 different parts of his body, in order to let us all know which locations were least painful, and which were more painful. Fun fact of the decade: getting bee-stung on your penis shaft is, according to his research, "oh god oh no oh NO." I might be paraphrasing.

His research was not presented in the Proceedings of the National Academy of Sciences, or PNAS.

Justin Schmidt was jointly awarded the prizes for physiology and entomology with Smith, for creating the Schmidt Pain Index, which came up in our article about bullet ant venom.

So there you have it. Science: never not interesting.

Any of our readers care to share some of the wackier science stories they've heard? Surely we've covered a few of the weirder ones - but there's always more out there to discover.