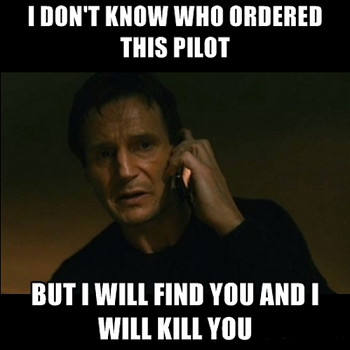 Training Day, Red, Taken, and The Island of Dr. Moreau are just a few movies set to receive the small screen treatment.

Last week, we reported that Stephen King's The Mist was being turned into a TV show, no doubt thanks in part to the cult hit Frank Darabont's 2007 film adaptation has become. But that was only the tip of the iceberg, ladies and gents.

As it turns out, The Mist is only one of nine (!!) movie properties announced to be receiving a television reboot in the past week, and that doesn't even include the Limitless spinoff which premieres tomorrow on CBS.

So now, in no particular, are the eight other movies with TV pilots currently in development at various studios (but mostly NBC and CBS).

-"Taken" (NBC): Yup, a prequel series based on the trilogy of movies that saw Liam Neeson save his family from various Eastern European scumbags is heading to the small screen. "Taken" will center around a young Brian Mills and how he came to develop his "particular set of skills." Original writer Luc Besson will serve as executive producer, but the show is still searching for a series writer and showrunner.

-"Rush Hour"(CBS): Produced by Warner Bros., CBS' upcoming "Rush Hour" series will revolve around a by-the-book Hong Kong police officer played by Jon Foo who is assigned to a case in Los Angeles, where he's forced to work with a cocky African-American LAPD officer (Justin Hires, 21 Jump Street) who has no interest in a partner. Psych creator Steve Franks will serve the showrunner for the first season, and you can check out the first trailer here.

-"Red"(NBC): Jon Hoeber and Erich Hoeber, the writers of the 2010 film and its 2013 sequel (which itself was based upon a limited comic book series from Warren Ellis and Cully Hamner) is currently in the works over at NBC. Details are sparse, as no cast has announced for the project, but according to Deadline, the series will be "set in a more grounded and authentic world, focusing on the characters' darkly hilarious struggles to survive civilian life as they simultaneously fight for and against the very organization that threw them out." If Betty White does not land a role in this, all will be lost.

-"Behind Enemy Lines"(FOX): Based on the 2001 action flick that starred Owen Wilson, the pilot of this "high octane military thriller" will be written and directed by Homeland's Jeffrey Nachmanoff. Set in Latin America this time around, Behind Enemy Lines will focus on "an American flight crew that is shot down while on a secret mission over the jungles of Latin America, their commanding officer aboard an aircraft carrier fighting to bring them home, and a female CIA officer in Washington who stumbles into a sprawling conspiracy that unites them all." (via Deadline

-"To Live and Die in L.A."(WGN): Telling the story of "a fearless Secret Service agent will stop at nothing to bring down the counterfeiter who killed his partner," To Live and Die in L.A. was a critically praised cult hit released in 1985 that starred William Petersen, Willem Dafoe, and John Pankow. Original director William Friedkin will direct and executive produce and Robert Moresco will script the series and also serve as an EP.

-"In the Line of Fire"(NBC): NBC is *also* developing a series based around Wolfgang Peterson's 1993 political thriller, which starred Clint Eastwood as a disgraced secret service agent and John Malkovich (who earned an Oscar nomination for his performance) as assassin Mitch Leary. Carol Mendelsohn and Josh Berman -- the team behind CSI -- are set to write the series.

-"The Island of Dr. Moreau"(CBS): The legendary novel from H.G. Wells which has been adapted into films and other works on no less than a dozen occasions -- most notably, the 1932 classic The Island of Lost Souls and the 1996 disaster of the same name starring Marlon Brando -- is currently in development at, you guessed it, CBS. Sleepy Hollow co-creator Phillip Iscove will write the script, which will switch the role of the titular doctor to that of a woman. "Dr. Katherine Moreau expands the boundaries of medicine through bold and revolutionary scientific experimentation and treatments in her privately funded island hospital."

The one similarity I'm noticing between all these movie-to-TV projects? None of the original casts are involved, which in the cases of Rush Hour, Taken (aka Straight Tooken starring the incomparable Liam Neesons) and especially Training Day, was all but tantamount to their success. Hooray for fresh blood, I guess?

But hey, at least they're not doing something as insane as turning Big into a TV show, right? RIGHT?!!