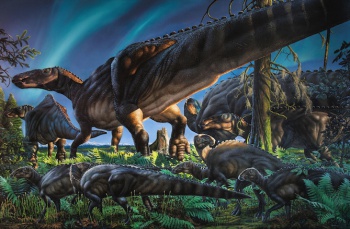 Newly discovered fossils have revealed a dinosaur species which thrived in Alaska 70 million years ago.

We've only recently started coming to terms with the idea that dinosaurs weren't the cold-blooded lizards we imagined. It's still hard to shake those childhood notions, especially when we always picture them stomping around a tropical jungle. But if you already read the title of this article, you know this picture just got even more complicated. Researchers have uncovered fossils from a new species of duck-billed dinosaur that thrived in Alaska roughly 70 million years ago.

"It wasn't so long ago that the idea of dinosaurs living up in the polar world was kind of, you know, really?" University of Alaska Museum of the North earth sciences curator Patrick Druckenmiller said. "Are you kidding?"

Recent studies already suggested that dinosaurs were neither warm or cold-blooded, meaning they could live in relatively colder climates. Yet Alaska's Prince Creek Formation still offered a treasure trove of dino fossils, roughly 10,000 bones from the new species. Alaskan temperatures during this ancient time period averaged in the low 40s - which is fairly cold by reptilian standards.

Dubbed "Ugrunaaluk kuukpikensis", this duck-billed herbivore was 25 feet long and bore a resemblance to Alberta and Montana's "Edmontosaurus". The number of bones indicates a strong presence in the region, which means the species had adaptations to live in the cold. It's currently believed the bones came from a site where a herd of young dinosaurs were attacked. If true, that might even mean carnivorous dinos lived in the territory as well.

How dinosaurs survived the Alaskan chill isn't the only question scientists have - there's also the matter of darkness. Due to its geographical location, the region would have been pitch black for three to five months every year. There's also no sign the species migrated to follow the sun, so unless Ugrunaaluk kuukpikensis are actually the 30 Days of Night vampires, they probably had adaptations for low light as well. "It's intriguing for us to ponder how they survived those months of darkness," Florida State University professor Greg Erickson explained. "We're just finding this whole new world of dinosaurs we didn't know existed."

For now, researchers plan to track growth rates of dinosaur bones to determine if an unusually slow metabolism kept back the cold. Either way, it's fascinating to imagine dinosaurs living farther North than we ever expected. Maybe Marvel Comics was right about the Savage Land as well.