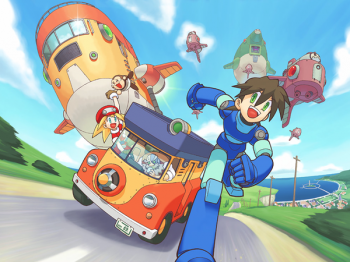 A PSN port of the original Mega Man Legends will be released next Tuesday for $9.99.

Mega Man Legends was a kind of Mega Man spin-off with a little bit more story and plot than "jump n' shoot". It quickly became a cult classic but wasn't all that popular with Capcom, who unceremoniously canned a planned sequel for it back in 2011, effectively killing the franchise. But now, Capcom has suddenly shown interest in the spin-off, announcing that a PSN port of the original game will launch on PSN next Tuesday.

"And so it is my privilege to confirm that next Tuesday, September 29th, you will be able to purchase the precocious PS1 classic, Mega Man Legends, on the North American PlayStation Store. The game will be $9.99, which is considerably lower than the game's going rate on the likes of eBay. I hope you'll agree with me that it is well worth it to finally see this game available again," wrote Capcom community representative Greg Moore.

He added that while the port will be playable on PS3/4 and PS Vita, it won't work with the PSP due to technical limitations.

Hopefully this renewed interest means that Capcom may be planning on rebooting the franchise, which would be some pretty good news considering Mega Man Legends fans have recently had their hopes dashed, with the failure of spiritual successor Red Ash's Kickstarter.