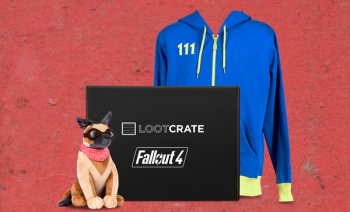 The Limited Edition Fallout 4 crate from Loot Crate will be available starting today.

In July, Bethesda announced a partnership with Loot Crate to create limited edition Fallout 4 crates. The crates are available in small quantities independent of the main Loot Crate subscription, and goes on sale today, September 23, at 12PM PST.

"We've hand-selected rare and exclusive Fallout collectibles and gear worth over $150, including a Vault 111 Hoodie perfect for traversing the Wasteland and an EXCLUSIVE Dogmeat Plush along with many more Fallout goodies that will remain a mystery until the crates are delivered in November," the reveal reads.

Crates are available for $100 USD, $130 International, and the crates will ship in early November.

This is not the first time Loot Crate has been player 2 for a video game themed exclusive: the company previously teamed up with Nintendo for an amiibo subscription service.