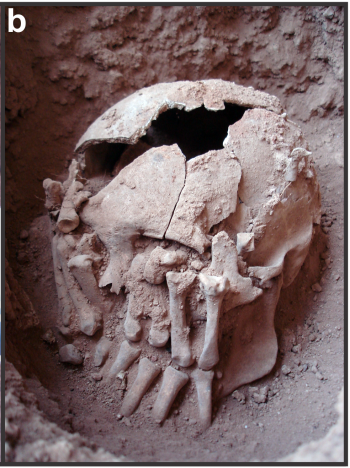 An international team of researchers has uncovered a 9000-year-old decapitated head in Brazil, with a pair of severed hands across its face.

About nine thousand years ago, in what is now Lapo do Santa, Brazil, someone had a very, very bad day (and it had nothing to do with venomous frogs).

Anthropologists and archaeologists have long known about the practise of ritual decapitation in the New World. Until recently, the act was thought to have originated in about 1000 B.C. in human-sacrificing cultures of the Andes, on the Western coast of South America. The discovery of a decapitated skull in Brazil, however, may flip that notion on its head. "We won't get fooled again," said unaffiliated researcher, Detective Horatio Caine.

The dig makes for a pretty grisly sight: placed over the face of the severed head are a pair of hands. The right hand is placed over the left side of the skull, fingers pointing up; the left is arranged in the opposite manner.

The gallery below has high res photos from the dig, for all you decapitation super-fans out there:

Lapo do Santa is a popular spot for archaeologists - evidence suggests it's been habitated for at least 10,000 years, and because it lies within a protected area, remains are relatively undisturbed. The skull was found in a circular pit, covered with limestone cobbles. It is one of at least 26 burial sites dating back the Holocene period.

Meanwhile, a team excavating a similar spot in Mexico announced they've got one foot in the grave.