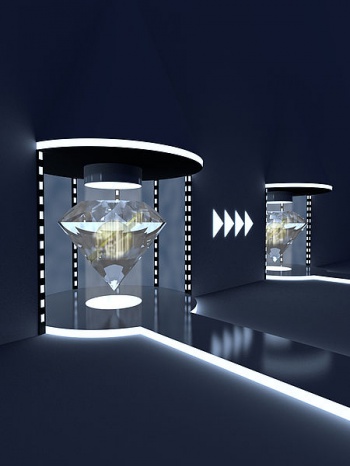 Researchers from NIST have "teleported" quantum information across 100 km of optical fibre - breaking a record in the process.

When a scientist uses the word "Quantum" while describing a new breakthrough, it usually signals that a science-fiction future is getting closer to reality. Take quantum teleportion - which has nothing to do with Star Trek teleports, sadly - but is still pretty important for the future of the internet. The process refers to exactly transmitting quantum information - encoded within qubits - from one location to another without losing any data. This is much harder than it sounds, but a team from the National Institute of Standards and Technology (NIST) just broke a quantum teleportation record by transmitting data across 102 km of fiber cable.

First, let's take a quick crash course on how quantum teleportation works. Traditionally, the binary two-state system -all those 1's and 0's running behind computer programs - is the easiest way to transmit information. Quantum information theory deals with qubits instead, which can represent a 1 and 0 at the same time.

So far so good - but actually transmitting qubits without losing the information is a colossal pain. Albert Einstein himself never believed it could be done, and even last year science could send it about ten feet. NIST's breeakthrough is a huge leap forward by comparison.

NIST has published a handy graphical breakdown of the process for anyone who feels quantum mechanics goes right over their head. According to NIST's Marty Stevens, the record was only possible thanks to advanced single-photon detectors created by the organization. "Only about 1 percent of photons make it all the way through 100 km of fiber," Stevens explained. "We never could have done this experiment without these new detectors, which can measure this incredibly weak signal."

At the moment, we can achieve quantum teleportation over greater distances in free space - the current record there is 143 km. But if quantum information can be transmitted across conventional wiring, we have a wider range of options when designing quantum networks - especially when it comes to security encryption. Regardless, developments like these are strongly worth following in the coming years.