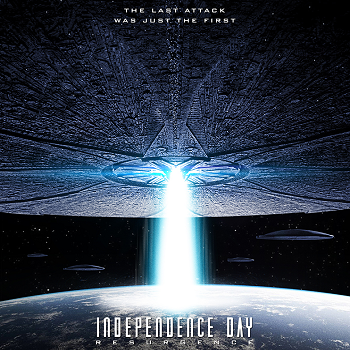 An upcoming comic book will bridge the gap between the 1996 mega-blockbuster and the upcoming sequel for moviegoing audiences.

It will have been 20 years to the day since Independence Day first invaded theaters when its sequel, the aptly-titled Independence Day:Resurgence is released on June 24th 2016. And oh, how those two decades have shaped the lives of the original film's stars: Will Smith went from the likeable, bankable Fresh Prince to a (still likable) scientologist struggling to find a decent project (Hancock excluded), Jeff Goldblum became the darling of indie comedy, and director Roland Emmerich shifted his focus from alien invasions to the gay rights movement.

A lot has changed in the world of Independence Day, to put it lightly, and as such, the creative team behind the box office juggernaut will be releasing a comic book ahead of the 2016 sequel in order to fill us in on what the gang's been up to.

Described as "rich psychological prison drama" (which, huh?) by Titan Comics editor Steve White, the Independence Day issue will "be a golden opportunity to segue nicely into next year's blockbuster sequel by taking the mythos of the original and maybe adding a little darkness to it."

No comic book writers or artists have been announced as of this write-up, but it will be interesting to see how both the comic and the film write-out the first film's protagonist played by Smith, who was removed from the project when 20th Century Fox couldn't meet the $50 million salary he demanded for the back-to-back sequels.

The Hollywood Reporter managed to get ahold of a brief synopsis of Independence Day: Resurgence, and it's about as vague as it gets.

Twenty years after the events of the first film, the international community recovers and builds up Earth's defenses using technology salvaged from remains of the alien forces. However, the aliens were able to send a distress signal before their final defeat, which results in a new task force of alien ships coming to Earth and threatening the human race once more.