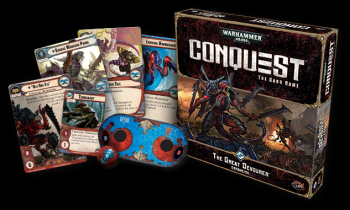 The first big expansion for the Warhammer 40,000: Conquest card game introduces the Tyranids to the Traxis sector.

Fans of Fantasy Flight's Warhammer:40K Living Card Game have been waiting since the game's announcement for of its universe's most iconic factions to join the fray. With the release of The Great Devourer, players can now build their own Tyranids deck.

For the uninitiated, Conquest is a two-player card game, where each player has a deck representing one of the game's eight factions. They battle over the planets of the Traxis sector with powerful warlords, units, spells and tactics. The first player to conquer three planets wins. We liked it quite a bit.

The core set had seven factions, with the Tyranids, and pseudo-undead robots the Necrons, promised to come further down the line.

The big expansion launches the slavering terror of the hive fleet with an enormous amount of content. Two warlords for the new faction, complemented with dozens of new cards supporting a few different play styles. Each of the game's other factions also gets a handful of new cards to keep them on par with the biological menace.

FFG's "Living Card Game" products are shaking up quite a bit lately.

Are there any fans of Conquest at the Escapist? Anyone else agree the Tyranids are just a bit over-powered? Not that I mind - them not being able to ally with other factions keeps deck-building options just a little limited. Now - who's building a ridiculous, janky swarm deck with me?