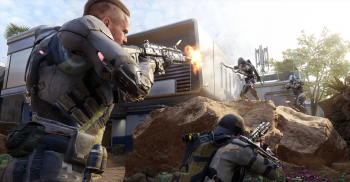 Call of Duty: Black Ops 3 will launch on the PS3 and Xbox 360, but developer Treyarch announced today that the last gen version of the game will be severely cut back. Namely, the PS3/360 edition will only have online multiplayer and zombies modes, and completely lack any kind of singleplayer campaign.

"The ambitious scope of the 1-4 player coop Campaign design of the PS4, Xbox One and PC versions could not be faithfully recreated on old generation hardware," explained Treyarch in a blog post. Additionally, other features built to leverage the next generation hardware like the new Weapon Paint Shop and the new suite of eSports tools will also not be available on the Xbox 360 and PS3 versions.

In order to make up for this fairly substantial lack of content, Treyarch has announced that the last gen versions of the game will sell for a whole $10 less than the current gen versions, with a suggested retail price of $49.99.

This seems like quite a big deal. Taking out the singleplayer campaign is quite a significant subtraction, and the cost of the game has not been significantly altered enough to warrant it. I realize that releasing on last gen consoles is important to reach as many people as possible, but if you're gonna have to strip the game down this much, what's the point?