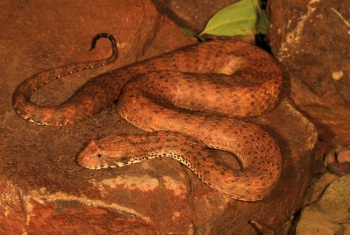 Researchers in Australia have identified a new species of snake in the Kimberley region. It is extremely venomous, and a member of the death adder family.

Surprising no one, a highly venomous new snake has been found in Australia.

It's called the Kimberley death adder and it can expertly blend into its surroundings. At two feet long and the orange-brown color of the surrounding sand, it waits until a small animal - frogs, lizards, small marsupials, human beings - goes by and then strikes, injecting an extremely toxic chemical into the animal, killing it fairly quickly.

It can be so easy to forget that Australia is so much more than a country weirdly puritanical about video games. We should not forget it is also host to some of nature's deadliest or strangest animals!

Simon Maddock, lead author of the paper describing the snake, says, "it's not clear how many Kimberley death adders there are in the wild, but they're probably quite rare." So they are very hard to keep track of, but also, don't worry about it!

Adds Maddock: "And given the number of new species found in Kimberley recently - including frogs, lizards and many plants - it's likely to be just one of many currently undescribed snakes in the west of Australia."

Presumably, it is called the "death adder" because when you are in Kimberley, you'll often think to yourself, "this is beautiful, but it's missing something crucial." Well, why not add some death?

Note: yes, I know what an adder actually is. I watched BBC in the 80s!