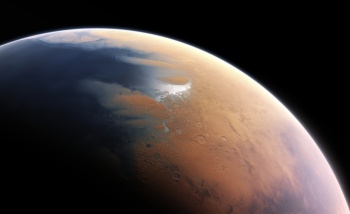 Ahead of NASA's upcoming big announcement about the red planet, a paper published by the European Planetary Science Congress might have ruined the surprise: it confirms the presence of flowing salt water on Mars.

Update: NASA's conference is live, and confirms our suspicions - there is definitively liquid salt water on the Mars, flowing even as I type this.

Lujendra Ojha of the Georgia Institute of Technology led the team that made the discovery. "It's unambiguous evidence that liquid water is flowing on Mars," he says. The paper is published in Nature Geoscience.

Original Story: NASA has been hyping their major Mars announcement for a few days now, but it looks like the European Planetary Science Congress beat them to the punch: at long last, astronomers can officially confirm the presence of flowing, salty water on the red planet.

For a long time, scientists and amateurs alike have been waiting for just this discovery. Water, of course, is a key ingredient to life as we know it - and its liquid presence on another planet is very exciting to anyone even remotely curious about the possibilities for extraterrestrial life. What creatures might swim in Mars' briny rivers?

Check out the gallery below for a high-res version of an artist's rendering of what Mars might have once looked like with a liquid ocean, courtesy of Wikipedia - not to mention a few of our other favorite views of the red planet:

But water means much more than that. It does not just mean our neighbor once hosted life, or perhaps still does - it means it might support our own habitation, whenever we get there. Water, too, is another indicator of just how similar our world is to Mars. That planet and Venus act as cautionary tales - what might happen to us in the far future; what could have happened.

The discovery in particular concerns brine, or very salty water. The assumption had long been that fresh water would too easily freeze on Mars' surface; apparently, the red planet's rivers have some built-in anti-freeze.

We'll update this post once NASA makes their official announcement; in the meantime, discuss the news in our forums! References to Total Recall are highly encouraged.