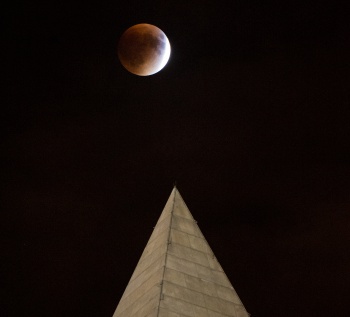 Last night's super blood moon eclipse brought out thousands of amateur astronomers, and we have a little gallery of some our favorite shots from around the world.

Sunday night's lunar eclipse wasn't, as it turns out, the end of days. Instead, it was a beautiful evening with a dark red super moon in the sky, and it brought photographers out trying to grab the perfect shot of the unlikely phenomenon.

As explained in our previous article, a super moon is what happens when our friendly satellite is at its closest point to Earth in its elliptical orbit, while simultaneously being at its fullest phase. The red color is a result of our own atmosphere scattering blue light, leaving a "blood moon" behind.

Oh, and if you feel like being extra nerdy - and I get the impression Escapist readers do - you can go around calling it a perigee (the closest spot in the lunar orbit to us) syzygy (when the moon, Earth, and the sun line up - a full moon, basically). Annoy your friends!

If you took a photo of the eclipse, we'd love to see it! And don't forget to send the image NASA's way - your shot might be featured!