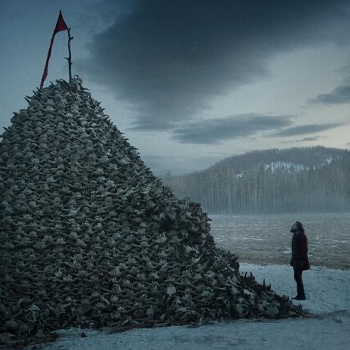 Alejandro Inarritu's follow-up to Birdman is twice as gritty, just as pretty.

After cleaning up at this year's Oscars with the masterpiece that was Birdman, it's understandable that the next project from Alejandro Inarritu would carry a lot of hype with it. And with The Revenant, it looks like Inarritu is doing anything but cracking under the pressure. Well, other than that his follow-up has gone 40 million dollars over budget, hadn't filmed an ending as of last month, and could have resulted in the castration of an actor (more on that in a bit).

Using the same "one-take" philosophy that made Birdman such a unique commodity, The Revenant centers around two 19th century explorers (played by Leonardo Dicaprio and Tom Hardy) who must battle the elements, native tribes, and *gasp* even each other in order to survive life in the wild west. And not the giant mechanical spider-filled, wicky-wicky Wild West that most of us are familiar with.

Ahead of its limited theatrical release this Christmas (and wide opening in January), New Regency and 20th Century Fox have released 6 new, hi-definition images from Inarritu's upcoming epic, and my God, they are GORGEOUS.

Oh right, back to the issues with The Revenant I mentioned earlier. According to The Hollywood Reporter, The Revenant ran into budgetary issues early on, no doubt due to the fact that the production had to move from Canada to Argentina to combat insane weather conditions.

"As fate would have it, when the production was counting on snow, it was so warm near Calgary that even attempts to manufacture it or truck it in failed. Later, temperatures dipped to 25 degrees below zero, or minus 40 degrees with the windchill factor. But since the action at that point was set in the autumn, actors were asked to go without hats and gloves. "Everybody was frozen, the equipment was breaking; to get the camera from one place to another was a nightmare, said Inarritu."

And as for that whole "castration" thing? Well, it turns out that may or may not have been blown out of proportion by members of the crew, depending on who you ask.

Leaving little time for the crew to prepare, Iñarritu decided that a naked character should be dragged along the ground. The director remembers being concerned about the actor's genitals and laying down plastic sheeting to protect him. "I asked him several times, 'Are you fine?' " says Iñarritu. Each time he asked, he says the actor replied that he was prepared to try another take. "I was super considerate because he was a nice, 22-year-old guy," says Iñarritu. While crewmembers say the actor was in pain, Iñarritu dismisses that as "a lie."

Check out the teaser trailer for The Revenant below.

The official synopsis comes to us via a press release:

"Inspired by true events, THE REVENANT is an immersive and visceral cinematic experience capturing one man's epic adventure of survival and the extraordinary power of the human spirit. In an expedition of the uncharted American wilderness, legendary explorer Hugh Glass (Leonardo DiCaprio) is brutally attacked by a bear and left for dead by members of his own hunting team. In a quest to survive, Glass endures unimaginable grief as well as the betrayal of his confidant John Fitzgerald (Tom Hardy). Guided by sheer will and the love of his family, Glass must navigate a vicious winter in a relentless pursuit to live and find redemption. THE REVENANT is directed and co-written by renowned filmmaker, Academy Award® winner Alejandro G. Iñárritu (Birdman, Babel)."