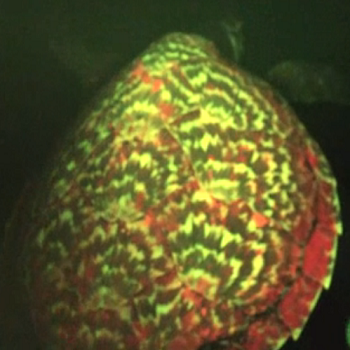 The ocean can truly be a trippy, trippy place.

For those of us seeking the unknown, you can't find many places more worthy of exploring than Earth's many, vast oceans. Between the unfathomably deep chasms and the prehistoric seabeasts, the ocean is the kind of place Lenny Pepperbottom would describe as ""pretty neat."

Take for instance, a recent night dive near the Solomon Islands, wherein a team of scientists happened upon the first biofluorescent reptile ever documented.

As University of New York City Marine biologist David Gruber describes it, he and his team were diving off the Solomon Islands in late July attempting to capture biofluorescence in small sharks and coral reefs.

Instead, they were treated to a glowing hawksbill sea turtle that"came out of nowhere this fluorescent turtle," according to Gruber.

It looked like a big spaceship gliding into view, he recalls: An alien craft with a patchwork of neon green and red all over its head and body.

The marine biologist captured the turtle sighting on a video camera system, whose only artificial illumination was a blue light that matched the blue light of the surrounding ocean. A yellow filter on the camera allowed the scientists to pick up fluorescing organisms.

Gruber followed the turtle for a short while, but "after a few moments I let it go because I didn't want to harass it." The hawksbill proceeded to dive down into the pitch-black ocean.

While bioluminescence has been already been documented in everything from anglerfish to glow worms to certain types of bacteria and fungi, there has never been a case of a biofluorescent reptile -- the difference being that the former simply projects light, while the latter transforms it and produces it in a different color.

Why does this exist? Alexander Gaos, director of the Eastern Pacific Hawksbill Initiative, seems to believe that the the fluorescence might aid in protecting the turtles from predators.

"[Biofluorescence is] usually used for finding and attracting prey or defense or some kind of communication," says Gaos. In this instance, it could be a kind of camouflage for the sea turtle.

You can watch a video of the incredible discovery over at NatGeo, but we've got the money shot gif right here.

And just like that, we are one step closer to living in Super Mario World like I always prayed knew we would one day.