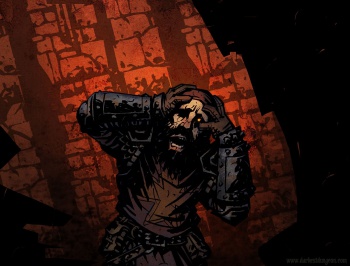 It's no secret that The Escapist loves Darkest Dungeon; it shouldn't come as a surprise, then, that we are very excited about the game's latest update, Those From Below, which is set to go live on the 29th of September.

The update activates the game's fourth dungeon, The Cove. The watery graveyard joins The Weald, The Ruins, and The Warrens that Early Access users have been enjoying (or despising, depending on how their Virtue checks go). Along with the fresh locale players will be facing new monsters, new bosses, new curios and no doubt a good amount of surprises.

For the uninitiated, Darkest Dungeon is a rogue-like RPG. It is grim and grimy down to its core, and the game's mechanics - unforgiving difficulty, sudden death, madness - play into its theme quite well. If you've wanted to see what a randomly generated anti-hero looks like, this is the game for you. I think I have accidentally made a few Hamlets (no pun intended), then watched them die at the hands or hooves of mutated pig-men.