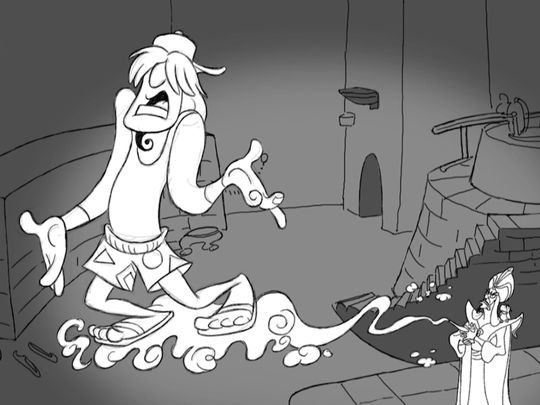 When Aladdin comes out on Blu-Ray next month, fans will be treated to more of Robin Williams' ad libs as the Genie.

When the extraordinary Robin Williams died last year, tributes were made to his many roles that made us laugh. One of his most endearing, though, was one where you never got to see his face.

As the Genie in Aladdin, Williams' wild and zany personality came through to make the character arguably one of Disney's best. And in honor of that, Disney will be releasing - as part of the re-release of the 1992 film on Blu-ray on Oct. 12 - more voice work from the actor's studio time as he was creating Aladdin's partner in crime.

"Robin was totally into the process," Ron Clements told USA Today. He co-directed Aladdin with John Musker. "Way after we thought we had so much material, he had new ideas and kept wanting to try things. It was just amazing to watch him work."

"In this movie, Robin's Genie transcends time and space. So does Robin Williams. It's perfect that he played a genie because he's kind of a genius," Musker said. "He was unique because of that lightning-quick improvisational ability and yet always being able to connect to the story. Animation was a medium that was truly able to celebrate Robin's talents."

One outtake has Williams riffing as a surfer dude as the evil Jafar looks on.

In addition, as part of the digital re-release of the film today, a demo tape of a song intended for actor Jonathan Freeman's Jafar, entitled My Finest Hour, will be released. "There's a rebirth of Aladdin right now," Musker said, pointing to the new Broadway production of the Disney film that again stars Freeman as Jafar. "The idea of unveiling a song that wasn't in this play and not in the original movie is really cool."