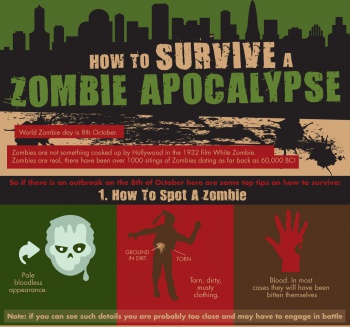 MorphCostumes is gearing up for World Zombie Day with an educational survival infographic.

We've all seen the signs. Blood red moons are in the sky, the Muppets are becoming perverts, and Hugh Jackman is retiring Wolverine. Clearly, these are the end times, and an inevitable zombie apocalypse will soon descend on us. By the time I explained that unshakable logic, shamblers would have eaten our brains, so let's focus on preparations instead. Thankfully MorphCostumes has already compiled the research into a convenient infographic just in case the outbreak occurs during World Zombie Day on Oct. 8.

You can see the image in the gallery below, where we've split up the information by category. How does it hold up compared to prior zombie survival coverage? Not too badly, all things considered. Its weapon choices are especially smart - you should absolutely focus on light firearms with small ammo that won't slow you down when you need to run. The stopping power of say, shotguns, are only helpful when facing small numbers of the undead. If you must go melee, the Shaolin Spade is an excellent, if hard to find weapon that puts the now-standard katana to shame. And of course flamethrowers should always be a last resort, considering how quickly a blaze can get out of control.

The graphic addressed five categories: Identifying zombies, choosing weapons, blending in with zombies, zombie biology, and - most importantly - knowing when you've become infected. It even addresses zombie facts like average life span (3 to 5 years), biological advantages (stamina and hearing), and fashion choices which will get you killed (mullets). There's even a breakdown of safest countries during a zombie apocalypse. America, Australia, and Canada are mostly in the green - Alaska is not. As for our European readers, you're in big trouble, and I'd suggest relocating to Russia as quickly as possible if you want to survive.

There's an uncomfortable lack of information dealing with non-zombie threats - what should we do about raiders or post-apocalypse dictators, for example? But The Walking Dead has covered that pretty extensively, which hopefully is enough of an education. Otherwise this infographic is a great starting point.

Unless the zombies are runners. Then we're in big trouble.

The complete image can be viewed here for your own convenience. What do you think of the zombie survival information contained within? Please share your thoughts in the comments - our lives may depend on it.