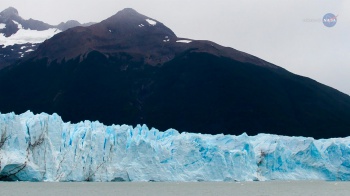 NASA scientists studying the ice covering Greenland is melting much, much faster than previously thought.

There has been just a bit too much positive, water-related news coming from NASA this week - even if it is all a leftist conspiracy. Thankfully, the space agency is here to bring us down again with some depressing news about the state of Greenland's dwindling ice shelf.

It's common knowledge that melting ice sheets and glaciers, particularly in Greenland and Antarctica, are contributing to a slowly rising sea level. In fact, if all of Greenland's frozen fresh water were to melt, global sea levels could rise by about 23 feet. It would be terrible if all that ice were to be melting about as fast as a stick of butter in a microwave, wouldn't it?

Now, environmental scientists sent to study the effects of global climate change on Greenland are reporting that its meltdown is occurring much, much faster than previously imagined. Hard numbers are few on the ground right now - NASA does not want to make an estimate on how many years Canada's second-favorite neighbor has left until more information has been procured.

The video they produced goes into detail on how the science works out:

The one takeaway NASA hopes people take from all this is simple: OMG. As we all know, OMG stands for Ocean Melting Greenland, the name of a new 5-year project that will rigorously study the problem from every corner of the island, whether by boat, plane, or seal-driven sled.

It isn't all bad news, from a certain perspective. There are people around the world who would love to have a melting fresh water glacier right next door. It's just going to be rough for those of us living along a coast, by a river, on an island...