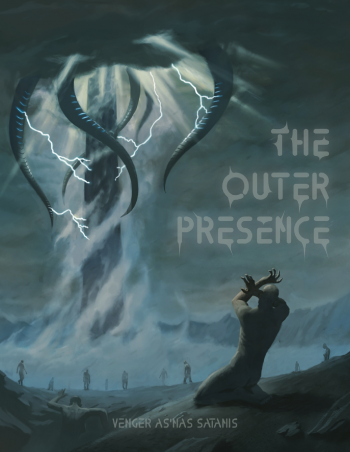 Looking for a Lovecraftian RPG to play with a minimum of fuss? Kort'thalis Publishing's The Outer Presence looks like a solid contender.

Horror games like Call of Cthulhu are great, but have a common drawback - you can spend lots of time fine-tuning characters who will die or go insane in a single night. Thankfully, The Outer Presence knows that fact, and embraces it entirely. Written by Venger Satanis using a modified version of Crimson Dragon Slayer's rules, this game is about quickly creating characters who are unique, flawed, and most likely doomed to a grisly end via cultist or eldritch horror.

Character creation in The Outer Presence involves rolling on five to six random tables, writing results down on a blank piece of paper, and assembling a background from the details. The process takes two minutes, yet still offers a huge range of investigators, from alcoholic military doctors, to sorcerers gangsters, and more. The rules themselves are simplified as well, adding dice to your pool for each advantage while otherwise treating you as an average human being. Not that actually succeeding is easy - average opponents still have a fair chance of beating you, while Lovecraftian beasts are almost impossible to kill.

It also includes a starting adventure, one appropriately-themed given the recent release of Green Inferno. A team of investigators visit a peaceful indigenous New Guinea tribe during the 1970s, only to find it's reverted to cannibalism under the leadership of a Mythos-touched professor. A word of warning that mature content absolutely abounds, and the adventure will be grisly with especially descriptive GMs. But if you're interested in pulpy horror that starts off mundane and ramps its way into cosmic, you'll probably find something to enjoy here.

Mostly though, what impresses me about The Outer Presence is how easily you can run it. In fact, you could take almost any Lovecraft-inspired supplement, swap in these mechanics, and play without making significant changes. It favors fast-paced pulp adventures a little more than purist campaigns, but anyone wanting the most Mythos from a little package should check it out on DriveThruRPG.

Disclaimer: This write-up is based on a review copy provided by the publisher.