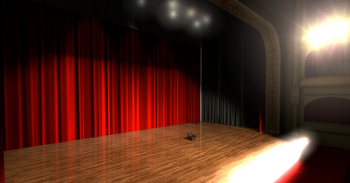 Stanley didn't know how to react to this news.

As a game developer, how could you possibly follow-up one of the most clever, critically adored narrative-driven games in perhaps ever? If you answered, "with almost no warning," you might be The Stanley Parable creator Davey Wreden.

Wreden announced the title of his new game this week, The Beginner's Guide, along with a release date. It's out tomorrow, October 1, on PC and Mac. The developer also noted in a tweet that the game is being released under his personal brand, Everything Unlimited Ltd., and not the Galactic Cafe banner as this new game was not a collaboration with William Pugh.

This is the game reveal equivalent to a declaration of name, rank, and serial number. A few screenshots have been released and a teaser site is up and teasing with an image of the view from a lit theater stage and all of the information Wreden has made available regarding the game -- that being it is a narrative-driven game being published by Everything Unlimited Ltd available for PC and Mac starting tomorrow.