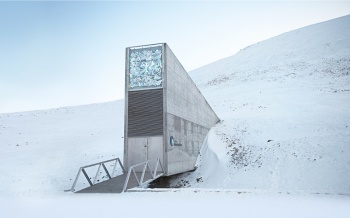 Scientists have requested the first ever withdrawal from the Svalbard Global Seed Vault in order to restock a supply damaged by the fighting in Syria.

In vault-related news that has nothing to with Fallout, scientists made the first withdrawal from the Svalbard Global Seed Vault this week.

Often referred to as the Earth's "Doomsday Vault," the SGSV houses the world's backup supply of seeds to ensure biodiversity and keep relics of plants alive as extinctions take hold. It is located deep within a mountain on a remote archipelago in Norway. It would make a pretty good super villain secret base, to be honest.

The request to withdraw seeds came from the International Center for Agricultural Research in Dry Areas, another gene bank. Currently, the organization is based in Beirut, Lebanon, but was formerly head-quartered in Syria. As the fighting began, caretakers were able to remove most of the collection from ICARDA, but some workers stayed behind in Aleppo. While a promising 80% of its stock has been replicated since moving to Lebanon, ICARDA had plenty of empty space.

"ICARDA has worked extremely hard and with extreme dedication to try and do their best during this time," says Brian Lainoff of the Crop Trust, which runs the Global Seed Vault.

There are gene banks like ICARDA the world over. The Svalbard vault is a last-resort back-up plan for all of them. It has nearly a million different varieties of crop plants under ice, waiting for their moment in the sun - and with the world changing so rapidly, it only becomes more important every day.

"If something were to happen to one of those collections around the world, they can always come back to the seed vault and retrieve what might have been lost," Lainoff explains.

Despite violent the backdrop for this story, the existence of agencies such as ICARDA and SGSV can give a person a great deal of hope. Then again, war... war never changes.