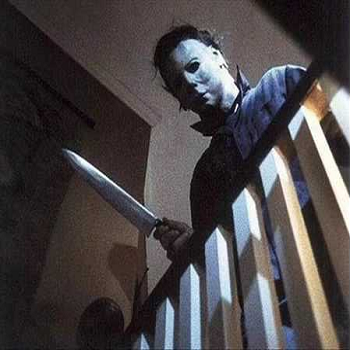 Just in time to ring in the Hellidays, Movies, Films, & Flix has returned with another masterfully-compiled ranking of our favorite horror films.

Fall has fallen, ladies and gents, which means that regardless of whether you like it or not, most of your TV channels are going to be flooded with a deluge of horror films both new and old for the next 30ish days. Tired of seeing Michael Myers terrorize the Strode family, or hearing the sickening thud of a teenager wrapped in a sleeping bag as Jason Voorhees whips them against a tree? TOO BAD, this is Lucifer's month and we, his devoted followers, will not apologize for it!! MWAHAHAHAHAHA!!!!!!!

If you haven't picked up on it yet, I happen to be something of a horror film fanatic, and if you're reading this, I assume that you are too. And as horror fans, we are second only to comic book/superhero fans in our ability to engage in lengthy hypothetical discussions about which of our favorite films is "the best," or which of our beloved bad guys would topple the rest in a no-holds-barred fight to the death. Thankfully, Movies, Films, & Flix is here to help us answer at least one of those questions as objectionably as possible.

Movies, Films, & Flix is of course, the website that helped decide "The Best Horror Films of the 21st Century" through a combination of hellaciously-thorough research and reader polling (the results of which were almost unanimously declared by the readers of this site to be "bullshit"). Now, they've returned with an even more complex system to determine what is, once and for all, the greatest horror franchise of all time.

But first, the criteria that the M, F, & F gang used to make their preliminary omissions.

1. The franchise needs to have at least four theatrically released films (Jaws I-III, Jaws: The Revenge). Compiling box office data on direct to DVD movies (Puppet Master etc..) isn't possible and the data would be unreliable. Click here to see all the franchises that make up the list.

3. The post will look at return on investment (ROI), highest average per franchise and which series averages were the highest after the first film. For instance, we all know The Exorcist made a lot of money. I want to know how the other Exorcist films did in comparison (not well).

4. Critical/audience data was collected from Rotten Tomatoes, IMDb and Amazon. Metacritic did not have enough data so we excluded it from the MFFM.

5. I am looking only at domestic box office and had to leave out several international series due to lack of data.The toughest omission was the Rec series. I also had to leave out the Universal Monster franchises because there is a lack of consistent box-office data. Viva la Bride of Frankenstein though!

These preliminary criteria were then combined with other factors like: Rotten Tomatoes critic and audience scores, IMDB user scores, Amazon consumer ratings, and each film's average return on investment (among other things) to create a numerical ranking system that answered the "Greatest Franchise" query once and for all. But enough dilly-dally; let's get to the top 15.

You can head over to Movies, Films, & Flix to check out the rest of their franchise findings, including handy-dandy infographs and a user poll to weigh-in. I, on the other hand, am just glad we could finally put this debate to rest and am sure there will be no heated outcry in the comments section.

In any case, let the fall frightfest begin!