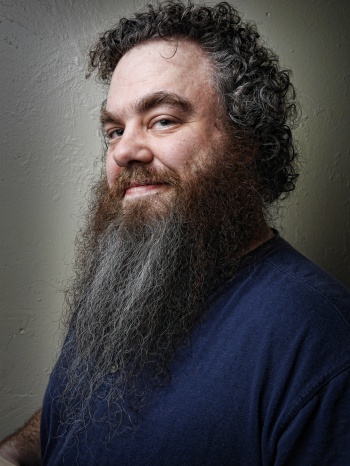 The rights to Patrick Rothfuss' Kingkiller Chronicles book series has been won by Lionsgate. The books will become a movie, television series, and video game - all at the same time.

Lionsgate and Patrick Rothfuss have worked out a complex rights deal concerning the latter's hugely popular fantasy novels, The Kingkiller Chronicles. The multiplatform proposal will see a film, television series, and video game all developed simultaneously, and negotiations have apparently been going on for several months.

Pat seems pretty pleased: "Honestly, I've never been very interested in a straight-up movie deal. But Lionsgate was willing to work out something different, a multiplatform deal where they develop the films, TV series, and games simultaneously. That will give us the screen time to develop the characters and show off the world."

"What's more, through this whole process, they've treated me with amazing respect. I never thought a studio would approach me as a creative partner who understands how stories work."

Kingkiller Chronicles follows the adventures of Kvothe, as he recounts to a biographer how he went from being a travelling performer to one of the most notorious, reviled, and beloved wizards the world had ever seen - and ended up tending bar at an out-of-the-way inn. He masters magic, loves women, plays music, crosses swords, finds treasure and loses it. He gets beaten up a lot, but not half as much as he probably deserves. As far as modern fantasy literature goes, most estimates place it second in popularity only to George R.R. Martin's Song of Ice and Fire.

Board games have already been developed based on those the characters play in The Name of the Wind and The Wise Man's Fear. There's no telling what parts of the story a video game would follow, or what might be left out for a film or TV show. How will they portray his music, among other things? My sincere hope is they take a page out of Scott Pilgrim's adaptation and have real-world artists fill in. Imagine Kvothe standing on stage gently strumming his lute, his rapt audience weeping; meanwhile, movie-goers are treated to the Stones' Gimme Shelter. Rothfuss: call me.