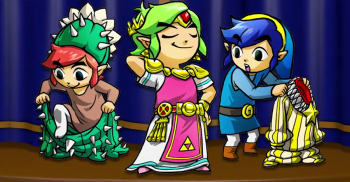 The Legend of Zelda: Tri Force Heroes is Nintendo's upcoming multiplayer focused Zelda title for 3DS. You'll be able to play the game with three friends either locally, or online, but don't expect to play with anyone from outside of your region, as Pocket Gamer has learned that the game's online component will be region-locked.

While region-locking is par for the course at Nintendo, restricting online play is something new, as prior multiplayer focused titles Mario Kart 8 and Splatoon have allowed gamers all over the world to play together.

Additionally, just like Splatoon, Tri Force Heroes will lack any kind of voice support. You'll be able to send quick emoji-like messages ("over here!" "Totem up" "Item!") but obviously won't be too much help with such a puzzle-focused series as Zelda.