Kobold Press has launched the Kickstarter for Tome of Beasts, a third-party monster manual filled with over 300 new baddies for Dungeons & Dragons 5th Edition.

Is there anything more harmonious to the ears of a DM than to hear their players scream, "what even is that thing?!" Kobold Press clearly doesn't think so, and is about to unleash over three hundred monsters in the Tome of Beasts that promise to make players shout with fear and/or delight.

KP has launched a Kickstarter campaign for the 5th Edition project, with delivery expected in April of next year. We have a preview page showing off the Fext (with a higher-resolution image in the gallery below), a warlock twisted into undeath in order to serve its patron absolutely. If the writing for the Fext is any indication, a tremendous amount of thought and love has gone into the lore and mechanics of each of these creatures. The book's illustrations look downright delicious. 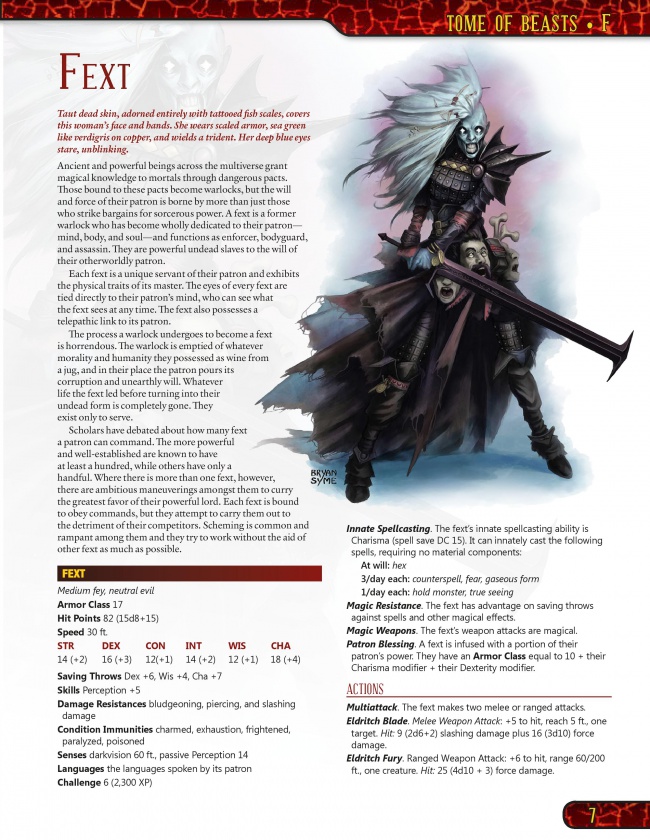 Featuring new demons, devils and dark fey; dragons and drakes; undead (Lich Hounds!); clockwork critters and more, the tome is going to be jam-packed with more than twice the number of creatures featured in Wizards of the Coast's own Monster Manual. Also in the Kickstarter is the Tome of Lairs, a compendium of, well, over a hundred monster lairs - pre-made, short encounters with monsters from the Tome.

Keep in mind that Kobold Press has a pretty decent track record. They've been publishing supplements for Pathfinder and previous Dungeons and Dragons editions for several years, now, and won an Origins award in 2012.

Who else out there is going to back this? Any warlocks out there already considering purging their souls for their patron's eternal favor?